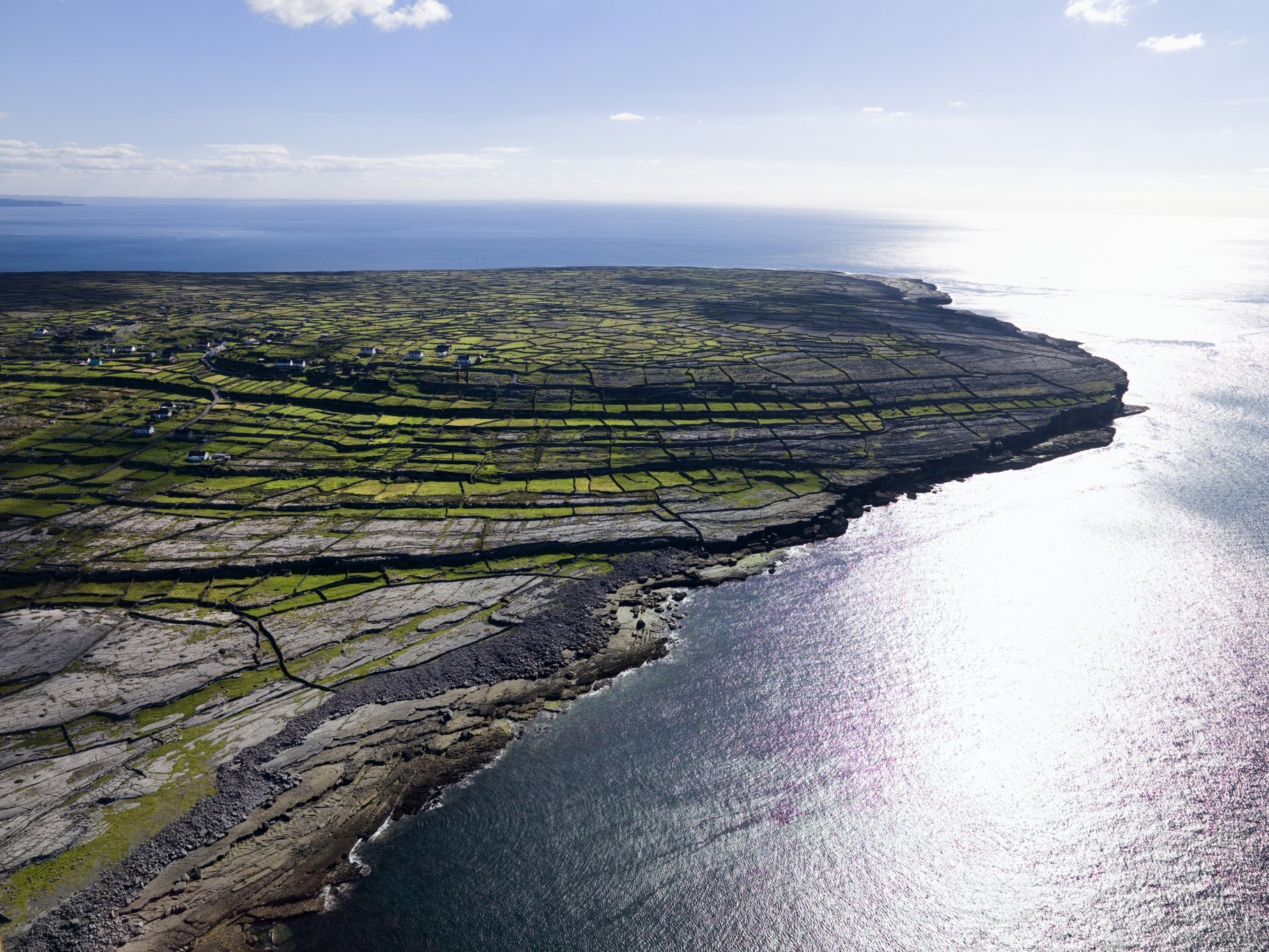 Inis Meáin, as its name translates, is the middle of the three islands. The inhabitants are settled mainly on the high sheltered land at the centre of the island, towards the old pier.

Inis Meáin has managed to suppress the intrusion of the modern world to a large degree and remains the quietest and most traditional of the three islands. It is famous for its traditional dress and literary associations. Inis Meáin boasts a fine new pier on the north end of the island which has greatly improved access to the island.

The island is a maze of winding roads, from the rocky hillside of the south to the quiet sandy beach on the north shore, with tall stone walls giving shelter to these paths and trails across the island. Wild flowers bloom everywhere and numerous examples of early settlement mark the limestone karst landscape. Inis Meain is the ultimate destination for the ‘get away from it all’ break.

The sailing time to Inis Meáin is 50 minutes. Attractions on the Island

Inis Meáin Knitting Company was founded on the island in 1976 and provides quality knitwear. The factory showroom has an extensive range of garments available at special discount prices for visitors. The attached museum chronicles the origins and meaning of the different stitches in Aran and houses some island memorabilia, including a bronze bust of John Millington Synge.

Dún Chonchuir is an impressive oval fortress measuring 227ft by 115ft and up to 20ft in height. Built on a great height, it has breathtaking views of Inis Meain and the neighbouring islands.

This circular structure is constructed of rough stone and is located on the isolated western edge of the island. The lookout lies at the edge of a sheer limestone cliff with the surf from Gregory's Sound booming below. Resembling a large chair, with a flat stone at the centre, it offers spectacular views of Inis Mór and Connemara, and was a favorite viewing spot and place of inspiration for Synge.

This church is famed for its magnificent stained-glass windows designed by the Harry Clarke Studios, as well as an altar designed by James Pearse, father of the Irish patriot Pádraic Pearse. The church was erected in 1939 in the place of a 15th century church, from which many special items have been rehoused. The baptismal font at the back of the church is from the older church, as is the Holy water font, the bell tower and the crucifix above the church entrance.

The Church of the Seven Sons was once an important place of pilgrimage. Although very little remains of the church, mass is still held here once a year on the 15th of August. The ancient site contains the grave and holy well of Saint Cinndearg. The grave dates back to the 7th century.

Dún Fearbhaí is the second largest stone fort on the island, and overlooks the main pier. This fort is most notable for its unusual, almost square shape, as opposed to the more common rounded shape. The terraces along the inside of the walls may have been used as a lookout for intruders or for some ceremonial purpose.

John Millington Synge's love affair with Inis Meáin began in 1898. He travelled to the island on the advice of fellow writer W.B. Yeats, and found Inis Meáin to be a great source of inspiration for many of his prose and plays. Synge admired the resilience and deep-rooted nature of the Inis Meáin people and their traditions. Among his many works are Riders to the Sea (1904), hailed by many to be the finest one act tragedy of the 20th century, and his master drama The Playboy of the Western World (1907). On his first visit to the island J.M Synge was hosted by Brid and Paidin MacDonnchadha (McDonagh).

The McDonagh’s great granddaughter, Theresa, has restored the cottage to its former state and is open to the public in the summer as a small museum. The cottage gives us an important glimpse into Synge’s life on the island.

Inis Meáin is just 2 miles long by 2 miles wide so it is easily covered by foot. The island is covered in trails and sheltered paths, with some dramatic cliffs and spectacular views. You can download a map for the walking routes.

Accommodation on the island is limited. Visitors can enjoy the modern, well presented and reasonably priced B&Bs on the island. There is currently no hostel accommodation on Inis Meáin. The island is also home to the multi award-winning Inis Meáin Restaurant and Suites, an intimate private retreat that celebrates island life, which is run by Ruairí and Marie-Thérèse de Blacam.

Please see contact details for accommodation providers on the island below:

The now world famous Aran Sweater, as seen on the catwalk for fashion houses such as Mulberry and Michael Kors, originates right here on the Aran Islands. The sweaters were knitted by the island women for the island fishermen and farmers to protect them from the harsh Atlantic weather. The sweaters, made from wool, were water-repellent, highly breathable and provided great insulation for the wearer.

As fisherman-style knits have become increasingly popular over the past few years, Inis Meáin’s authentic, yet progressive, designs have become one of the finest labels in the world.

The new styles are knitted in the finest yarns – wool, cashmere, baby alpaca wool, linen, and silk sourced from the finest mills in Europe and South America. Their subtle colours are inspired by land and sea, which reflect the landscape and seasons. The factory showroom on Inis Meáin has an extensive range of garments available at special discount prices for visitors. The attached museum chronicles the origins and meaning of the different stitches in Aran and houses some island memorabilia, including a bronze bust of John Millington Synge.

Gaeilge (Irish) is the first language of the island's population; but all are bi-lingual. Inis Meáin is one of the last strongholds for the Irish language, and each year hundreds of students (Gaelgoirí) travel to the Irish schools on the island to help improve their standard of Irish. During the Cromwellian occupation in the 17th Century, Irish was forbidden and English was enforced as the official language. Despite the threat of persecution islanders continued to speak Irish in private, and the language survived. The islanders are very proud of their language, and it is spoken just as much among the younger population.

Fishing has always been an important activity to the islanders. The barren limestone landscape did not produce large enough quantities of food, but the sea could always be relied upon to supply a rich source of fish.

Most fishing on Aran these days comprises of rock fishing, but some still fish using the old Currach (rowing boats), which can often be seen dotted around the coast of the island. There is a wide range of fish caught here including Cod, Whiting, Mackerel, Monkfish, John Dorey, Pollack and seasonally Lobster and Prawns.

The close proximity to the Gulf Stream makes for a mild and pleasant climate, encouraging a unique mixture of year-round Alpine and Mediterranean flora. The result is a brown grey landscape with an exceptional range of flowers including orchids, cowslips, gentian, drifts of sea thrift, honeysuckle, harebells, burnet rose, bloody cranesbill and many more.

There are many festivals and events held throughout the year on Inis Meáin, many of which are unique to the island like the Patrún Festival and the Inis ''Iron'' Meáin competition.

Patrún is the annual festival held on Aran to celebrate the patron saints of each of the islands. The day is action-packed, which includes many fun old school, wholesome activities for all age groups, such as boat racing (both Hooker and Currach), swimming, children’s competitions on the beach, Tug o' War, donkey racing, music and dancing on the old pier. Held on the last weekend in June, this festival celebrates the culture and traditions of Aran through the years. See our events page for a full calendar of events for each of the islands.