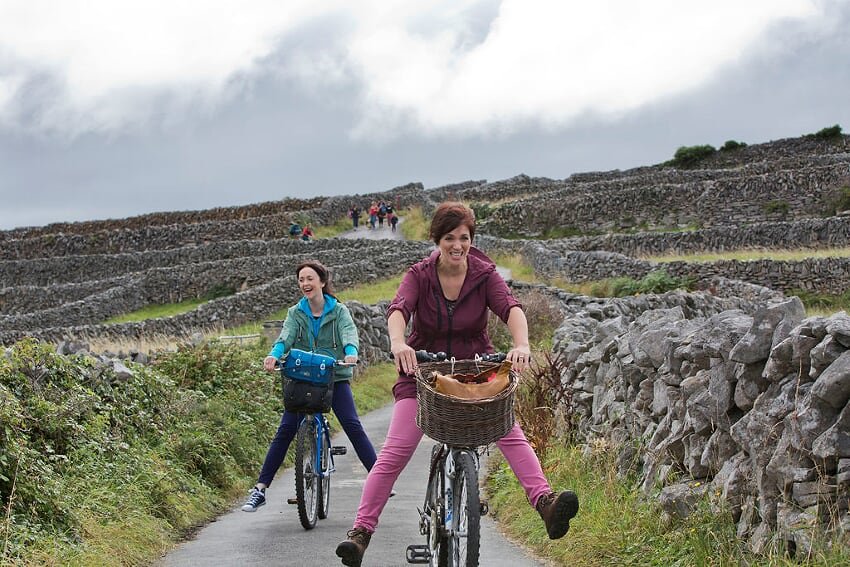 Inis Oírr is the smallest and most eastern of the Aran Islands. Less than 3 square kilometres in size, Inis Oírr is a walker’s paradise - with little motor pollution, breath-taking scenery, and spectacular flora that is unique to the island and the Burren area. The main village is right next to an unspoiled white sandy beach which is encompassed by a small hill and overlooked by the ruin of a castle and fort.

The island has the atmosphere of a small fishing village, with Currachs, fishing nets and lobster pots dotted around the place. The island has bars, restaurants, tea rooms and a reputation for great music and an enjoyable night out.

The sailing time to Inis Oírr is 55 minutes. During the Middle Ages the Aran Islands were ruled by the O’Brien family. The islands were crucial in controlling access to Galway Bay and, as such, were often contested and fortified by competing powers.

The castle was home to the O’Brien Clan until 1582, when they were ousted by the O’Flaherty Clan of Connemara. The castle was occupied by various clans until 1652, when the Aran Islands were surrendered to Cromwellian forces. Tourists can visit the remains of the castle today, and a tower house is located close to the highest point of the island. The remains of this castle make for a fascinating sight, towering on the high ground above the main village and port.

Dún Formna, meaning ‘the top of the hill’, is Inis Oírr’s only recognized fort. Perched on the hilltop surrounding O’Brien’s Castle, the fort dates back to a much earlier period, thought to be circa 400BC.

The fort differs from the forts of the other islands in that it has one singular wall with no terracing and the interior is not as highly constructed as others. This may be how it was originally built but it is likely that it may have been changed at the time the castle was constructed.

This is one of the island's most noted prehistoric sites. It is located close to the main village and harbour. It is a stone mound that many visitors to the island often fail to recognise as an ancient burial ground, where artefacts and cremated remains, dating back to 1500BC have been found.

Teampall Chaomháin is the church named after the patron saint of the island, St. Caomháin. The site is also home to St. Caomháin's grave, burried under the ground. It is not visible from the road and usually has to be dug out every year after the winter winds blow sand in and cover it.

St.Chaomháin is believed to have been a brother of St. Kevin, the founder of the magnificent monastery complex of Glendalough in Co. Wicklow and a disciple of St. Enda of Inis Mor. St.Chaomháin is the patron saint of Inis Oírr. His feast day is celebrated on the 14th of July, a day when the islanders come to the small church for Mass.

Cill Ghobnait lies on the western side of the island. A limestone sculpture, by sculptor Eileen Mac Donagh, stands outside the site. The site itself contains the small church of 'Teampall Ghobnait', two raised gravestones, a beehive hut and a large elder tree of sacred importance. This is a place of pilgrimage, as it is where Saint Gobnait resided when she came to Inis Oírr from the Burren.

One of the most unusual and popular sites on Inis Oírr is also one of its newest. The wreck is located on the most easterly point of the island. This rusting hulk was formerly a cargo ship which ran onto some rocks near Inis Oírr on the 8th March 1960. No lives were lost in the accident, mainly due to the bravery of the local islanders, who risked their own lives in rough seas to come to the aid of the sailors on board the ship. The ship was later moved up onto the rocks by heavy seas and much to the bewilderment and surprise of many visitors to the island, this is where it now rests. An aerial view of the wreck is featured in the opening credits on the Father Ted TV series.

Located on the road to the Plassey shipwreck, Lock Mór, (meaning big lake) is the island's only fresh water lake. The area around the lake is one of the most beautiful and tranquil parts of the island.

The main village on the island faces a beautiful long white sandy beach with crystal clear turquoise waters. This beach is largely uncrowded and is safe for swimming. During the summer months there is a lifeguard on duty during the day. Rod fishing from the main pier, or along the coast line at high tide, is a great relaxing pastime whilst visiting the island. Mackerel are an easy catch when in season during the summer months.

Áras Éanna, the island's arts and heritage centre was established in 2000 and a converted weaving factory originally built in 1982. As a contemporary arts centre, Áras Éanna runs a residency programme for visiting artists from Ireland and abroad. Artists stay for up to 4 months and exhibit their work. There is also a theatre where films, concerts and plays are shown regularly. Archive films are shown during the day.

There are a number of companies offering mini-bus tours of the island. All tour guides are native to Inis Oírr and are well informed on the island's history, flora and fauna. The mini-bus tours are about one hour long, and include stops at the major sites on the island. Visitors then return to the main village where they can visit the sites closest to the village on foot.

Bicycles are the best way to get around, where it's easy to meet people along the way and get a better feel for island life. Bikes can be hired on arrival from the top of the pier. Mountain bikes of all sizes can be rented at very competitive daily and weekly rates. They also provide a free map upon which the island's sites are marked.

You can hire a traditional pony and trap at the pier on arrival, or you can hitch a ride as you walk along the island's winding paths. These traps are driven by friendly island jarvies who will tell you all about the island and answer all your questions about island life. This is truly lovely way to see the island, and there is no more stylish way to arrive at your accommodation than in a horse and carriage.

Accommodation on the island is limited but wide ranging. Budget travellers can enjoy the lively atmosphere of the modern, well presented and reasonably priced hostel on the island. The island also boasts a large number of fine guesthouses, B&B's and one hotel.

Áras Éanna is a multifaceted Arts and Heritage Centre, housed in a renovated weaving factory on Inis Oírr. The centre contains a 75 seater theatre/cinema, three art galleries, a café, the offices of the translation business “Cleas Teoranta”, as well as a basket weaver and quilter's workshops. Since its foundation in the year 2000, Áras Éanna has played host to some of Ireland’s leading visual and conceptual artists, musicians, performers and actors. The Áras also contains a much in demand self-contained studio/apartment for Artists in Residence.

Please check out our events page for upcoming events at Áras Éanna.

Gaeilge (Irish) is the first language of the island's population; but all are bi-lingual. Inis Oírr is one of the last strongholds for the Irish language, and each year hundreds of students (Gaelgoirí) travel to the Irish schools on the island to help improve their standard of Irish. During the Cromwellian occupation in the 17th Century Irish was forbidden and English was made the official language. Despite the threat of persecution, the islanders continued to speak Irish in private and the language survived. The islanders are very proud of their language and it is spoken just as much among the younger population.

Fishing has always been important to the islanders. The barren limestone landscape could not produce vast quantities of food, but the sea could always be relied upon to supply a rich source of fish.

Most fishing on Aran these days comprises of rock fishing, but some still fish using the old Currach (rowing boats), and these can often be seen dotted around the coast of the island. There is a wide range of fish caught here, including Cod, Whiting, Mackeral, Monkfish, John Dorey, Pollack and seasonally Lobster and Prawns.

The close proximity of the Gulf Stream makes for a mild and pleasant climate and also encourages a unique mixture of year round Alpine and Mediterranean flora. In spring and early summer countless tiny stone-walled barren fields are awash with colour and the wonderful aroma of wild flowers. The usual native Irish flora of harebells, scabious, red clover, oxeye dasies and saxifrage are common, as well as a variety of Arctic ‘dryas octopetala’ and Alpine ‘gentiana verna’ and ‘minuartia verna’.

There are many festivals and events held throughout the year on Inis Oírr, many of which are unique to the islands, such as the Patrún Festival and the Cleasathon.

Patrún is the annual festival held on Aran to celebrate the Patron Saints of each of the islands. The day is action-packed, and includes many fun old school, wholesome activities for all age groups, such as boat racing (both Hooker and Currach), swimming, children’s competitions on the beach, Tug o' War, donkey racing, music and dancing on the pier. Held on the last weekend in June, this festival celebrates the culture and traditions of Aran through the years. See our events page for a calendar of events for each of the islands.

Please see below for a list of annual events: